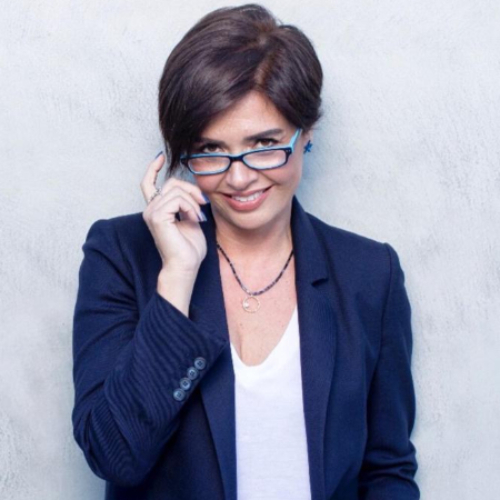 Born in Ankara.Completed her primary and secondary education at TED Ankara College where she got the chance to study by ranking the second in Turkey. Later, she graduated from METU Department of Architecture. A traffic accident during her post graduate education on The History of Architecture program moved her to İstanbul and into the media world.

She continued her media career at Star TV channel with ‘Gece Hattı’ and ‘Kırmızı Koltuk’ which she started as a reporter at ATV channel News Center. She prepared the documentaries ‘Mimarlık ve Yaşam’(Architecture and Life) for NTV and ‘Yeşil Ekran’ for CNNTURK channels.

She was anchorwoman and editor at Habertuk TV channel founded by Ufuk Güldemir for the TV programs called 20. Saat, 13 Ajansı, Bildiğin Gibi Değil and Burası Haftasonu.

She was both the Newsroom Assistant to Editor in Chief and the anchorwoman of Kanal 1 Prime Time News. She raised the ratings of Prime Time News to the first 20 that she took over between 90-100.

She was the producer and the editor of TV programs called ‘Özlem Gürses’le Bakış’ and ‘Şahane Çocuklar’ at the same channel.

She hosted many prestigious celebrities at Skyturk channel in her program called ‘Özlem Gürses’le Çizgi Dışı’.

She was the authentic format creator and the editor of TV program called ‘3YÜZ’ which she hosted along with Vivet Kanetti Uluç ve Ayşe Böhürler at TV8 and Habertürk channels.

She was the screen face in the daytime TV Show ‘Affetsen’ at FOX TV channel.

The big change Turkey experienced in 2000s led her to search for “new opportunities, free spaces”.

One of her searches was ArtıBir TV channel that she became a part of a team believing in free journalism. She prepared and reported the Prime News with Uğur Dündar.

Until now, she took part in many national and international organization as “Moderator and Master of Ceremony”.

Her first book “Bazen Olmaz…” was released in May 2017 by Kronik Kitap.

Nowadays she is at SÖZCÜ Newspaper with her columns and interviews.

Özlem Gürses is married with a child named Uzay.