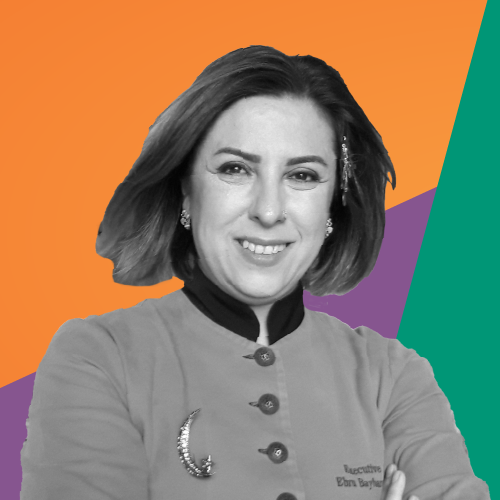 Ebru Baybara Demir, who is the first and only Turkish chef ranked in the best ten chefs of the world by Basque Culinary Prize, which is considered as the Nobel Prize of gastronomy, moved to Mardin in 1999 after completed her bachelor degree in Marmara University, Department of Tourism Management. Ebru Baybara Demir took the road to Mardin with a dream to meet the city with tourism and established the very first touristic restaurant in Mardin by the change she created, Cercis Murat Konağı, with twenty one women who believed in her. Demir, who has conducted extensive research on Anatolian cuisine for more than 15 years, has made many social gastronomy projects happen in the region, especially in Mardin, beyond being a chef, with the philosophy of "The taste of the meal on the table comes from the soil it takes and from the lives it benefits". Within this period, she achieved loads of prizes on both national and international levels. She presented Turkey in World Gastronomy Tourism Forum held by UNWTO and 5th Food on the Edge Summit that brought gastronomy elites and authorities together via the projects she conducted in the field. Realizing the firsts in the field of social gastronomy with measurable results, Demir also draws attention to the creation of sustainable local economies from the protection of the natural balance of seed, soil and water in its projects, and the ability to create a livelihood for everyone who works from the process in which the product reaches the consumer from the soil.

Ebru Baybara Demir, under the roof of Soil to Plate Agricultural Development Cooperative, of which she is among the founders of Mesopotamia's oldest wheat, Sorgul Wheat, Şemim Soaps, El Ele Elden Ele (Hand in Hand) Store and online sales platform, as well as local products with new initiatives to be implemented in a short time. She continues to work for the ideal cooperative model that brings together local cuisine and local human resources to create a role model in the national and international arena.