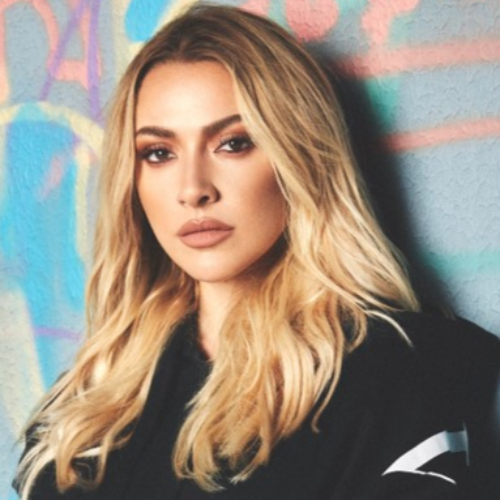 Hadise, born in Belgium in 1985, has achieved international acclaim and continues her music career in Turkey. With her looks, music and stage performances, Hadise has reached wide appeal and her work continues to make significant impacts on the music industry in Turkey.

Reflecting on the dreams she had at a young age, she remarks, "I have always wanted to sing as far as I can remember. I wanted to go on stage. I would make short dresses out of my sweaters, grab a hairbrush as a mic and would pretend to perform in front of my mirror."

Hadise participated in the Idols 2003 Contest in Belgium and six months later she received an offer for her debut album. After signing an album deal with 2 Brains Records, she worked with Yves Gaillard for her first single "Sweat." With the release of the music video for her second single "Stir Me Up" from her debut album also titled "Sweat" after her first single, Hadise landed on several European charts and became famous in Turkey.

Her music career in Turkey began with the song "Deli Oğlan," which is the Turkish version of her fourth single "A Good Kiss," that became a big hit in Europe. The singer, songwriter and producer Sezen Aksu wrote the Turkish lyrics for the song.

After her success in Europe and due to popular demand, Hadise became the top expectation to represent Turkey at Eurovision and she was selected to perform "Düm Tek Tek" at Eurovision 2009 by the national public broadcaster TRT.

Following the success of "Düm Tek Tek" at Eurovision and later worldwide, Hadise performed concerts in many countries and was the first Turkish singer to ever perform in some of those countries. With every passing day, she continues to expand on the success she achieved with her consecutive Turkish and English albums.

In 2011, Hadise joined the panel of judges for the talent contest The Voice Turkey, one of Turkey's top-rated TV programs and she continues to sit on the panel to date.

Hadise released her latest single, "Küçük Bir Yol," on all music platforms in September 2020 with the label Pasaj Müzik.