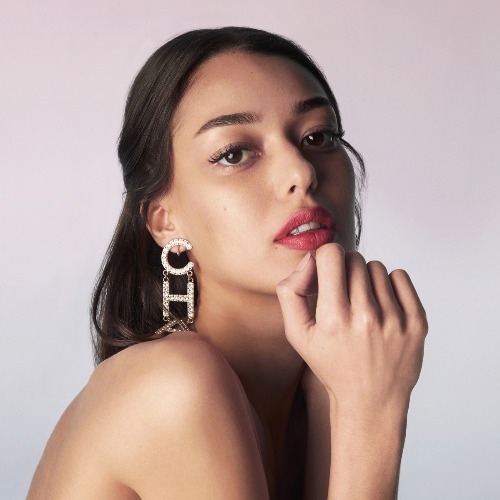 Dilan Çiçek Deniz was born in 1995 in Sivas. She attended İsmail Baha Sürelsan Conservatory during high school between 2009 – 2012. In the meanwhile, she won the acting award at the Antalya High School Theater Competition. Dilan Çiçek Deniz, also interested in literature, published her first poetry book when she was 15 years old. After studying for 1 year at Ege University, she realized what she truly desired was to read literature, she continued her education at İstanbul Bilgi University Comparative Literature Department. She is still taking singing and piano lessons.

At the age of 19, she placed the second in the 2014 Elidor Miss Turkey Beauty Contest and represented our country in the Miss Universe in 2015. In 2017, she was accepted from the American Academy of Dramatic Arts and studied acting in the Academy during summer.

Dilan Çiçek Deniz, whose first appearance on TV was with the character ‘Ebru’ in the TV series "Tatlı Küçük Yalancılar" in 2015, later appeared as a guest actress in 5 episodes of the TV series "Güneşin Kızları". She stole the spotlight with the character "Su", which she portrayed in the "Bodrum Masalı" series, directed by Mehmet Ada Öztekin in 2016. With these performances, she won the "Shining Star Award" at the Pantene Golden Butterfly Awards in 2016.

Recently, she gave life to lead role 'Sena' in the TV series 'Çukur', directed by Sinan Öztürk in 2018-2019 and shared the lead with Aras Bulut Iynemli, Perihan Savaş, Ercan Kesal, Erkan Koçak Köstendil, Öner Erkan and Rıza Kocaoğlu. She won the "Actress of the Year" award from the Magazine Journalists Association and Yeditepe University Awards in 2018, as well as the "Rising Actress of the Year" at the ELLE Style Awards in 2019.

Besides her TV career, Dilan Çiçek Deniz has also become the face of several commercial campaigns. She starred in a special shoot for 'Nike' with Mert & Marcus in 2017. Also, Deniz was the brand amassador of “Avon” between the years of 2018 – 2019 and continues to be the face of Garanti Bank since 2018.

Between the years 2018-2019, she became the brand ambassador of "Messika Jewelry" in the press campaigns and most recently she starred in a special campaign for "Women's Day" with "Elidor" in 2019.

Deniz, who also appears on the digital landscape, is the leading actor in the series "Yarım Kalan Aşklar" by Tims & B Production. Dilan Çiçek Deniz, whose first feature-length film experience was with Netflix's first local film production ‘Yarına Tek Bilet' directed by Ozan Açıktan, is currently taking the lead role in the series 'Alev Alev' by Ay Yapım, which will be broadcast on Show TV very soon.